Album Notes:  This plant is one of several exotic species seriously threatening the tallgrass prairie ecosystem.  Its resistance to fire, unpalatability to cattle, and prodigious seed production make it nearly immortal, outcompeting the native species.  Ranching is hard enough anyway.  This species is now cursing ranchers with an endless battle - giving many of them the blues! 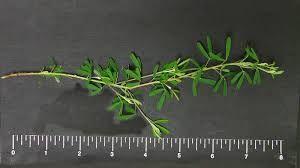 Burning in the fall - Spot-spraying every plant
Grazing goats and sheep - Might give us a chance
The bugs don’t even like it - It’s resistant to diseases, too
It’s really hard to fight those - Sericea Lespedeza blues

We maybe think we’ve killed one - But it makes a million seeds
So next year we may find - An even bigger patch of weeds
The cattle never graze it - it’s even drought-resistant, too
It’s really tough to have these - Sericea Lespedeza blues

You can’t try to ignore it - Or just leave it alone
Or in a few short years you’ll find - Your pasture’s overgrown
You have to hunt and stop it - If not, it’s certain you will lose
You’ll wish you never heard those - Serecia Lespedeza blues