Album note: As my tribute to the men and women who take care of the cattle and land, this is a composite portrait of folks I have worked with over the years.  Some are landowners, while others (as in this song) are not, but if ownership were granted on appreciation and knowledge of the land, they would own half the county.  Their understanding of the prairie and animals can't be found in books, and their innate good character and work ethic make them a rare treasure in today's world. 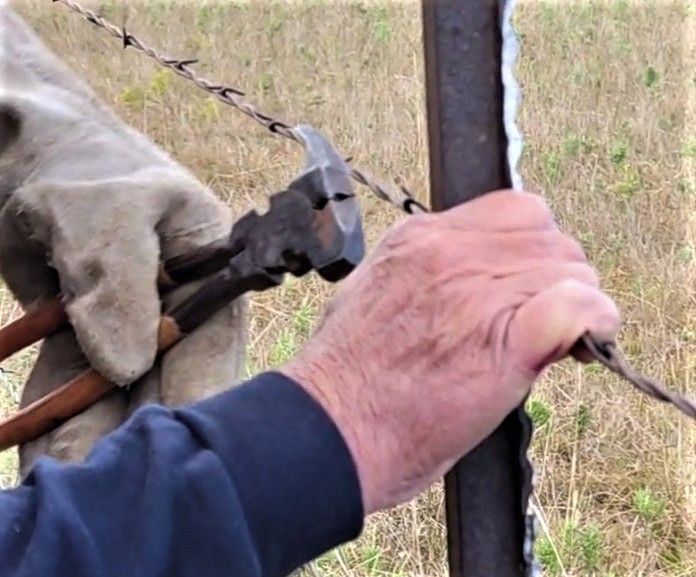 You'll meet him on the back roads in his dusty old flatbed
His trailer's lost its paint job and it's down to rusty red
He's prob'ly headed home now, cause his day's already gone
His horse and him have been at work since well before the dawn

His dashboard's like a journal of his complicated days
Some ear-tags, and some iodine, and little bits of hay
A busted rein, his worn out gloves, and fencing clips and pliers
An arrowhead, his favorite spurs, and a piece of balin wire

CHORUS 1:
He's a workin Flint Hills cowboy though he doesn't own a ranch
He's just the one who does the work way out there on the land
There ain't no money in it, but he has all that he needs
As long as he can ride out in these hills that keep him free

He can ride into a herd and cut a stray out just like magic
He's patient and he's gentle and he knows those critters' logic
But if a renegade comes chargin, he knows just what to do
He's handy with a rope so he can catch and load him too

CHORUS 2:
He's a workin Flint Hills cowboy always try'n to make ends meet
He helps down at the sale barn, hauls hay and winter feed
There ain't no paid vacation, he'll be the first to say
But a million folks would prob'ly like to live their lives his way

His chaps are full of patches; his hat's a dusty brown
His pony ain't no show horse but she sure can get around
He prob'ly knows most pastures much better than the owners
He's ridden every ridge and draw clear back into the corners

He's always there to help us put a critter in that's strayed
We trust him like a brother, because he's just that way
He doesn't talk a lot but there are stories he can share
Of wild cattle, ragin storms, and dangers he's been spared